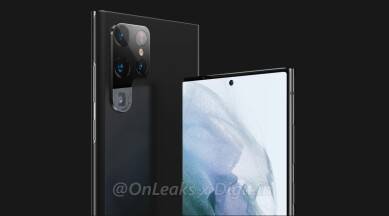 Samsung’s upcoming Galaxy S22 series, expected to launch early next year, has leaked online. The leaks suggest that the Galaxy Note 20 Ultra, the last Note-series phone from the brand that launched in August 2020 could finally be getting a true successor.

Leaked renders and specs have more-or-less suggested that the new Galaxy S22 Ultra is practically a Note-series device in its own right with a 6.8-inch screen, tiny punch hole cutout and a squarish frame. It even sports a new P-shaped camera layout, as per the leaks. However, it is what is on the bottom edge of the phone that is most interesting – an S-pen slot. Check it out below.

Samsung decided to skip the Note 21 series this year and launched only the S21 series, leading many to believe the brand had dropped the Note lineup and would be focusing only on the S and Z series moving forward. The rumour grew stronger after Samsung brought stylus support to the new Galaxy Z Fold 3 earlier this year.

Samsung’s S series and Note series smartphones have grown closer than ever over the last few years. With the highest-end variants of the S series phones becoming bigger with better displays and powerful performance, stylus support was a large part of what differentiated the two distinct smartphone series.

However, it seems Samsung could be making the best of this scenario with its upcoming phones. Rather than a complete discontinuation of either the S or the Note Series, it appears the brand will unify the two segments.

Rumours of Samsung clubbing the S series and Note series together have been around for over about two years now but it seems Samsung is now close to finally implementing the new strategy. Note that these rumours have not yet been officially confirmed and we will have to wait a little longer to actually know what Samsung is planning for both its series moving forward