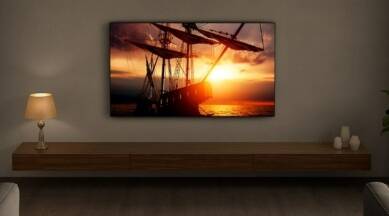 Realme today launched two new devices in India, including Realme Narzo 50 and Realme Smart TV Neo. Sony also unveiled a new high-end 8K LED TV. We also witnessed the launch of the Nokia G50 and iQOO Z5. In case you missed these tech launches, then you can take a look at them here.

Sony launched a new Bravia XR Master Series 85Z9J 8K LED TV in India, which is priced at Rs 12,99,990. The Smart TV comes with an LED screen with support for 7680 x 4320 pixels resolution and HDR up to the Dolby Vision format.

Sony’s new Bravia TV runs on Android TV for smart connectivity with Google TV interface, and also supports Google Chromecast and Apple AirPlay. The TV is powered by Sony’s XR Cognitive processor, which is also seen on some of the company’s other launches this year. The processor claims to adapt the picture to the surroundings for an optimised viewing experience.

The new TV from Sony has a rated output of 85W through a ten-speaker setup comprising of two mid-range drivers, four tweeters, and four subwoofers. Dolby Atmos Audio is supported, and the TV has 16GB onboard storage for apps and app data, with the Google Play Store for apps. The TV also supports local dimming, with a refresh rate of up to 120Hz at Ultra-HD resolution.

The 32-inch Realme Smart TV Neo has been launched for Rs 14,999. The television will go on sale on October 3 via Realme’s website, Flipkart, and offline stores. The TV ships with apps like YouTube, Hungama, and Eros Now. It packs a 32-inch display with support for TUV Rheinland low blue light certification. It packs a quad-core MediaTek processor and supports the Chroma Boost picture engine.

There is a pair of 20W dual speakers with support for Dolby Audio. Connectivity options include 2.4GHz Wi-Fi, two HDMI ports, a USB Type-A port, an AV port, and a LAN port. It also features CC Cast, which the company says can help people play mobile games or stream videos from their smartphones or tablets onto the TV.

The Realme Narzo 50A has been launched in India and it is priced at Rs 11,499, which is for the 4GB RAM + 64GB storage option. The device ships with Android 11. It offers a 6.5-inch HD+ display and a MediaTek Helio G85 processor. It has a triple rear camera setup with a 50MP main camera, a monochrome portrait sensor, and a 2MP macro sensor. On the from is an 8MP selfie camera.

The iQOO Z5 has been launched in China and the device is priced at CNY 1,899 (approximately Rs 21,600), which is for the 8GB RAM + 128GB storage variant. This mid-range phone is all set to make its debut in India on September 27. The dual-SIM device sports a 6.67-inch FHD+ display with up to 120Hz refresh rate and HDR support. It is powered by a Qualcomm Snapdragon 778G processor.

The iQOO Z5 has a triple rear camera setup, which consists of a 64MP primary sensor, an 8MP ultra-wide-angle sensor and a 2MP macro sensor. For selfies, you get a 16MP sensor. Connectivity options include 5G, Wi-Fi, Bluetooth v5.2, USB Type-C, USB OTG, and a 3.5mm headphone jack. The new iQOO smartphone is backed by a 5,000mAh battery with support for a 44W fast charge.

Nokia G50 runs on Android 11 and packs a 6.82-inch HD+ display with 450 nits of peak brightness. It is backed by a Qualcomm Snapdragon 480 processor. There is a triple rear camera setup, including a 48MP primary sensor, a 5MP ultra-wide camera and a 2MP depth sensor.