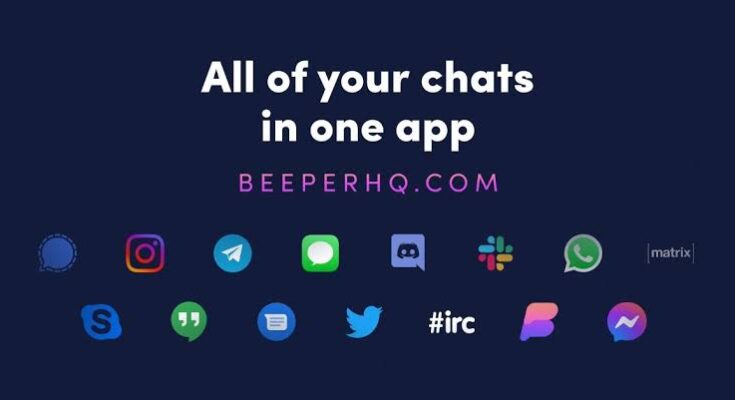 The number of messaging apps like WhatsApp has affected the space. There are popular apps like the iMessage for iOS devices and Signal which has recently risen to fame. Now, the Beeper app is the brainchild of Pebble CEO and founder Eric Migicovsky. This new app combines 15 different platforms and will add new features in the coming days. The social media platforms like Facebook and Instagram have different purposes that allow users to exchange messages. Altering between these apps and keeping the path of messages can be a tough task.

However, a new app now solves this problem. Pebble CEO and founder Eric Migicovsky announce that he is working on an app called Beeper which combines iMessage, WhatsApp, and 13 such other apps on one platform. The apps include Instagram, Telegram, Singal, and Twitter, among others. Beeper has the default chat client for two years. The app is accessible on macOS, Windows, Linux, iOS, and Android.

He tweeted that “New app alert: I’ve been working on Beeper for a while and today we’re launching! It’s a single app to chat on iMessage, WhatsApp, and 13 other networks. Been using it as my default chat client for the last 2 years and there is NO going back. Check it out beeperhq.com,”

The biggest challenge is to make iMessages work on Android smartphones where iMessage works on Android, Windows, and Linux using some trickery. Users who already own a Mac have to connect to the internet to install the Beeper Mac app that will act as a bridge. The platform is created on the Matrix open source project where developers write ‘bridges’ between Matrix other chat networks, like WhatsApp, Telegram, Discord, Skype, and more.

Beeper apps will merge include like Whatsapp, Facebook Messenger, iMessage, Android Messages (SMS), Telegram, Twitter, Slack, Hangouts, Instagram, Skype, IRC, Matrix, Discord, Signal, Beeper network. However, users should know that it is a subscription-based app that has charges to use it.