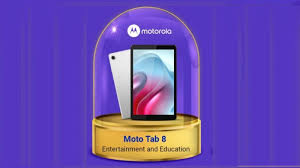 The Moto Tab 8 is expected to be a rebranded Lenovo Tab M8 FHD.Motorola is launching the Moto Tab 8 tablet in the upcoming Flipkart Big Billion Day Sale next month. It was acquired by Lenovo from Google in 2014.

The Moto Tab 8 front panel is surrounded by a thick bezel. It is a suitable device for entertainment and education. The company will be making its comeback to the Indian tablet market which is expected to cost less than Rs. 20,000. It will be competing against Android tablets such as Samsung Galaxy Tab A7 and the new Realme Pad.

The rebranded Lenovo Tab M8 FHD may have an 8-inch Full-HD IPS display that has 1,9201,200 pixel resolution and 350 nits brightness. It will be powered by MediaTek Helio P22T SoC with up to 4GB of RAM with a microSD card slot. The tablet is available in both 32GB and 64GB variants along with Wi-Fi and Cellular variants. It has a 13-megapixel camera and a 5-megapixel lens in the front and is backed up by a 5,000 mAh battery that supports 10W charging.