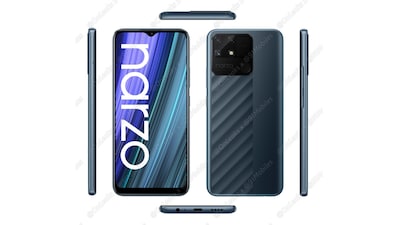 Realme Narzo 50 series bring the next Narzo-branded smartphones from the Chinese manufacture following the Realme Narzo 30 series. Narzo 50 series will make its debut in India between September 20 and 24.  It is expected to launch the Realme Narzo 50 series in India between September 20 and 24 in both 4G and 5G variants. It will also debut two AIoT products. It may succeed the existing Narzo 30A that is available in India at Rs 8,999 for the base 3GB of RAM and 32GB of storage model. The higher variant offers 4GB of RAM and 64GB of storage for Rs. 9,999.

The Realme 50A has a triple rear camera setup and rear-mounted fingerprint scanner. It comes with a notched display and a 3.5mm headphone jack along with a USB Type-C port at the bottom. It was reportedly spotted in the Bureau of Indian Standards (BIS) and Thailand’s National Broadcasting and Telecommunications Commission (NBTC) listings with the model number RMX3430.