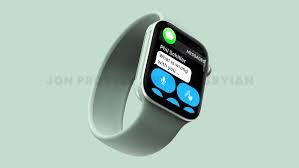 The new Apple Watch might come in 41mm and 45mm case size. It is expected to launch the Apple Watch Series 7 in September. It had many speculations hint at its possible look. It is confirmed that the new Apple Watch come with a redesigned case for a flatter look than before. The band can be seen sporting the “45mm” label on it.

Twitter user DuanRui, who has leaks in the past with the image shows the Leather Loop band for the Apple Watch Series 7 with the mention of 45 mm at its back. The image can be the biggest proof yet of the next Apple Watch sporting a larger size than the previous iteration. The DuanRui is not 100 per cent authentic that the argument for the 45 mm case on the next Apple Watch is not worth paying any heed to.  It is likely that the new Apple Watch equip the previous watch bands too, observed in the present iterations of the wearable.