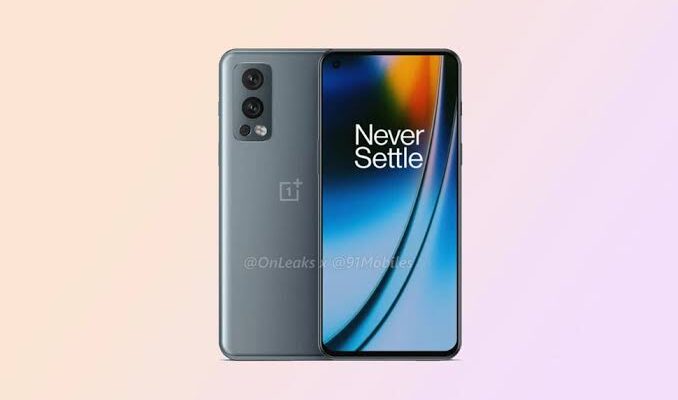 OnePlus Nord 2: The new leaks suggest that the OnePlus Nord 2 will likely feature a single front camera unlike the original OnePlus Nord that featured a secondary ultra-wide lens too on the front.

The OnePlus Nord 2 is set to be OnePlus’s next mid-range smartphone. Succeeding the original Nord, the OnePlus Nord 2 is expected to deliver upper mid-range performance. While the company has not officially shared the look of the device yet, a few new leaked renders from 91Mobiles have revealed a very similar aesthetic to the original Nord, minus the secondary front camera.

The leaked renders reveal slim bezels on all four sides with a single front camera encased in a punch-hole cutout, unlike the original OnePlus Nord which had dual front cameras in a pill-shaped cutout. The renders also show a familiar layout of the buttons with a power button and alert slider on the right and the volume rocker buttons on the left.

The leaks align with previous leaks from Steve H. McFly (@OnLeaks) which also show a similar look for the front of the device and a back that looks like it is inspired off the OnePlus 9 series.

OnePlus earlier shared on Facebook that the OnePlus Nord 2 will come with a 6.43-inch AMOLED display with 90Hz refresh rate and an HDR10+ certification. The device is also set to be the first OnePlus smartphone to not feature a Qualcomm processor as the Nord 2 will feature the MediaTek Dimensity 1200. Other expected specifications include 8GB RAM, 128GB storage and a 4,500mAh battery.

The OnePlus Nord 2 is set to be officially unveiled on July 22 at 7:30PM IST. The phone will go on sale via Amazon and the e-commerce site has published a dedicated OnePlus Nord 2 page. OnePlus is also launching a new audio product alongside the phone called the OnePlus Buds Pro, which is set to succeed the original OnePlus Buds from last year.