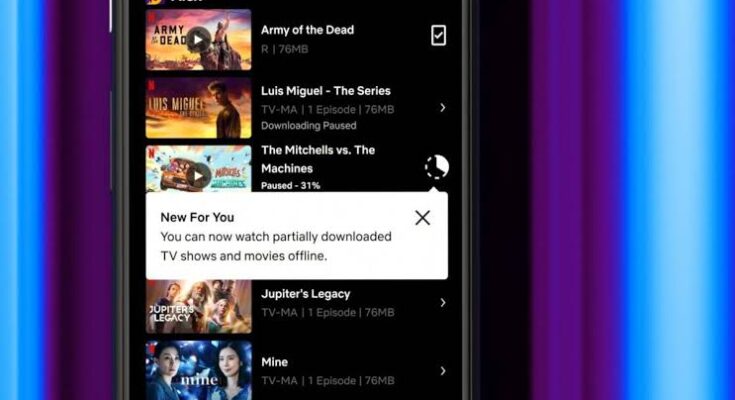 For Netflix users, this new partial downloads option means that they will be able to watch a series or film, even if it has not finished downloading fully. Netflix has introduced Partial downloads on Android. Here’s how it will work.

Netflix will make partial downloading available on Android phones and tablets, the company said in a blog post. The feature is still being tested on iOS and will be rolled out in the coming months on the platform. For Netflix users, this means that they will be able to watch a series or film, even if it has not finished downloading fully. At the moment, users need to wait till the download is complete before they can hit play.

In the blog post, Netflix says the reason they have introduced this feature is because they know users struggle with “unreliable wifi or expensive data that can complicate downloading” favourite shows or movies. The latest feature is part of Netflix’s efforts to introduce more features which can help users, especially those in markets such as India where data stability is a concern.

“We increasingly are understanding what our members needs and sort of the members we haven’t signed up, consumers’ needs generally, in more and more countries. And they all have sort of unique constraints that they’re working through. They have unique expectations from the service. And our job is to learn more and more and more about what those are and make sure that we are being able to offer the service in a way that feels natural that feels delightful to them,” Greg Peters, Chief Product Officer at Netflix had said in a statement in April this year.

The Downloads feature was introduced by Netflix in 2016. At the time, Netflix had said that the feature was launched keeping countries like India in mind. Netflix members in India are among the highest downloaders of content globally on the platform.

In 2018, Netflix further added to this feature by adding Smart Downloads on Android, followed by iOS on 2019. The feature ensures that the next episode in the series that one is watching is downloaded. It also deletes an episode once the user has seen it.

Earlier this year, Netflix launched ‘Downloads for You’ on Android, which automatically downloads recommended shows and movies onto a member’s mobile device. The feature is still being tested on iOS and will be coming soon.