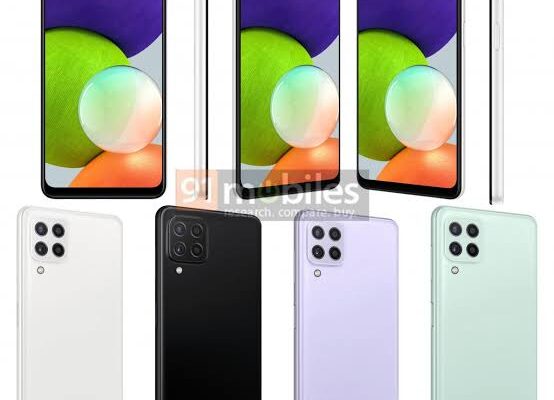 Samsung Galaxy A22 will be available in both 4G and 5G versions. This is the new smartphone under the Galaxy A-series. Samsung Galaxy A22 5G has been spotted on the Bluetooth SIG website. It will house an Infinity-U cutout on the front. It comes with a side-mounted fingerprint sensor. The leaks of the 4G version have a quad-camera setup on the back, while the 5G version has a triple rear camera setup. There is a difference between the two will be the 4G version will have an AMOLED display, and the 5G version will have an LCD. It will come in at least four colour options – green, purple, black, and white.

Samsung Galaxy A22 comes with a 6.4-inch display. It has the MediaTek Helio G80 processor. The 4G version has a camera setup of a 48-megapixel primary sensor coupled with 5-megapixel, 2-megapixel, and 2-megapixel sensors. It will have a 13-megapixel front-facing sensor, on the front. The 5G version has a MediaTek Dimensity 700 processor. The triple-camera has a 48-megapixel primary sensor coupled with 5-megapixel and 2-megapixel sensors. It is expected to come with a 5,000mAh battery with 15W fast charging. Samsung may work on an S-variant of the upcoming Galaxy A22. The handset comes with the Dimensity 700 processor. The leaks also said that the phone will feature a full HD+ display.

One Comment on “Samsung Galaxy A22 is coming soon”