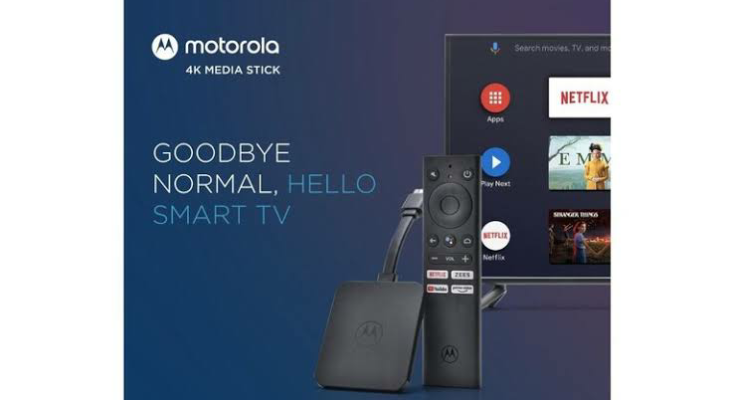 Motorola’s new streaming TV stick has the power of Android and 4K video resolution. Flipkart launched the new Motorola 4K Android TV Stick in India. The Stick supports HDR10 and Dolby Audio features. It will sell from March 15. It is a streaming stick like the Amazon Fire TV Stick or the Mi TV Stick which runs on Android. It is a surplus of streaming apps at the comfort of the fingertips. The streaming stick supports up to 4K resolution with the maximum video quality for movies and shows.

The Motorola 4K Android TV Stick is a part of the strategic partnership between Motorola and Flipkart. This arrangement is similar to what Flipkart has with Nokia as there has been a significant rise in demand for in-home video entertainment solutions. Since the pandemic began, and TV streaming sticks have become more widely popular as a result. The Motorola TV stick is a great alternative for consumers wanting to enjoy their favourite video content at home.

The Motorola 4K Android TV costs Rs 3,999 and available to buy from Flipkart from March 15. There may be some bank discounts as the sale begins later this month. It is extensively pricier than the Mi TV Stick, which costs Rs 2,799, and Nokia Media Streamer, priced at Rs 5,999.

The Motorola 4K Android TV Stick is founded on Android 9.0 Pie with an Android TV interface. Users can also download games on the stick but need a controller to play them. There is a built-in Chromecast on the Android TV Stick that allows casting the content and screen from the Android phone. The only condition is that the stick and the device need to work on the same WiFi network. It also supports Dolby Audio. It is supported for HDR10 and HLG video formats. The stick is powered by a quad-core 2GHz 64-bit processor with Cortex-A53 cores paired with a Mali-G31 MP2 850MHz graphic engine with 2GB of RAM and 16GB of internal storage. It also supports Google Assistant on the stick.