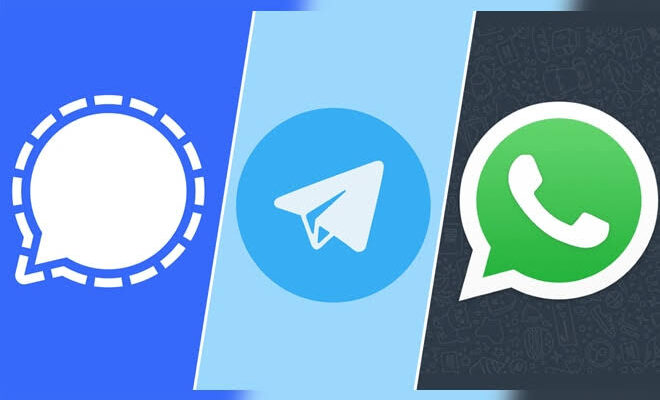 Facebook-owned WhatsApp’s Privacy Policy updates have provoked unhappy users to look for alternative apps. Whatsapp currently is the largest messaging service in the world with over 2 billion monthly active users while Telegram accounts for 400 million and Signal stand at a ballpark of 10-20 million monthly active users. WhatsApp is hugely popular and almost universal while Telegram is catching up and Signal just joined the million downloads race.

Let’s do a detailed comparison of the three app’s security and features.

Whatsapp has every feature the user needs. Users can broadcast messages to multiple contacts at the same time while it supports voice and video calls, both for individuals and groups. However, for group video calls, users are restricted to 8 users at any time. Whatsapp allows you to share all sorts of files and documents, share live location with your contacts. It also offers backup and restores functionality through cloud services like Google Drive and iCloud.

Telegram support more for groups with up to 200,000 members such as bots, polls, quizzes, hashtags, and a lot more which can make group experiences a lot more fun. It offers self-destructing messages. The size limit for sharing files is 1.5 GB.

Its users secure messaging, voice, and video calls, and all communications are end-to-end encrypted. Users don’t have the option to broadcast messages to multiple contacts at once. The best detail of Signal is “Note to Self”. Users can note thoughts and ideas while messaging with their friends and family. Signal allows you to relay voice calls to its servers as the identity remains private from the contacts. The feature is similar to what a VPN does.

Whatsapp has the end to end encryption (E2E) introduced in 2016 o on every single mode of communication that the app enables. The messages, video calls, voice calls, photos, and anything users share is end-to-end encrypted. WhatsApp uses the E2E protocol created by Open Whisper Systems, which is the name behind Signal messenger. Signal protocol is open source which is considered one of the best protocols for implementing end-to-end encryption in messaging platforms. WhatsApp does not encrypt backups and does not encrypt the metadata which is used to carry communication between two endpoints. It is one of the major criticisms of WhatsApp’s security model.

Telegram offers some level of protection to its users while it supports E2E encryption which is not enabled by default. The only way to use E2E encryption on Telegram is to use its secret chats feature. It has shared 0 bytes of data with third-parties and governments to this date. Telegram groups are not encrypted. The desktop client doesn’t support E2E encryption on any platform other than macOS.

A signal is on the back-end or the user-facing side of the service and uses the open-source Signal Protocol to implement end-to-end encryption. It also encrypts metadata too. Signal by default encrypts all the local files with a 4-digit passphrase. It also supports encrypted group calls. In terms of security, Signal stands above WhatsApp and Telegram which makes it the most secure messaging app between the three.

What data does each app collect

The list of data the messaging apps collects from their users:

Only personal data Signal stores are your phone number