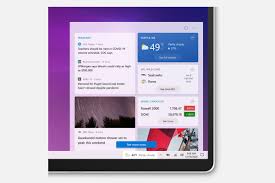 Microsoft is adding the taskbar feature to Windows 10 for Insider users. It brings the taskbar widget by later this year. The widget has both news and weather information in a detailed manner.

Windows 10 is in for a crucial overhaul. Microsoft is scheming to polish Windows 10 by introducing both big and small changes to various elements. The latest one is to see differences in the Windows 10 taskbar. Microsoft is adding the news and weather widgets to the taskbar to show at the top headlines from Microsoft News, stocks information, and the weather conditions right from the taskbar. This eradicates the need for third-party apps or visiting a website for information. These two widgets are available to testers starting today via Windows Insider.

The taskbar on Windows 10 will fetch real-time information using the Internet. On clicking this area, a box-shaped widget will pop up demonstrating the feed of content, like the headlines from information on stocks, and the weather information. Microsoft will gather information from over 4,500 sources, which the company is collecting with the help of artificial intelligence. The news information in the widget will also learn which news overtime is needed by the user or not.

The new taskbar feature going to require the Chromium-based Edge browser to be installed on the PC. Any news link that a user clicks in the widget will open in the Edge browser. It is not certain if Microsoft will allow switching the default browser for opening these links to Google Chrome.

Microsoft will also give the option to disable the taskbar. The taskbar feature will be rid of any advertisements. It is not clear that this widget going to be accessible in the Control Center which is available by clicking on the tool at the bottom.

The new widget is available to Insider testers through the developer’s channel. Microsoft will bring the widget feature only to Windows 10 users in India, US, Canada, UK, and Australia.